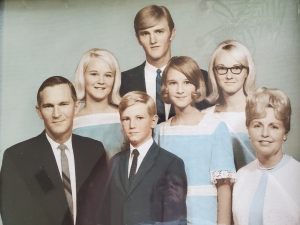 His memories will live on through the lives of his six grandchildren, twenty great-grandchildren, and one great-great granddaughter, residing across the country in FL, TX, WA, and HI. Norman was born in Mt. Pleasant, Michigan to Maurice Baker and Tressa Guernsey Baker, and was the fourth of five children. His father was an engineer and his mother was a secretary. He met his loving wife, Glenna, in Marion, Michigan, where they graduated from high school and were later married.

On June 16, 1943 Norman was inducted into the U.S. Naval Service during World War II where he served in the Asia-Pacific theatre as an airplane mechanic and flight photographer. He was honorably discharged on December 8, 1945 and eventually returned home to Michigan to marry his sweetheart on January 5, 1946. Throughout his professional career, he owned and managed several General Motors automobile dealerships in Michigan, Arizona, and Iowa, followed by many years developing mobile home parks and dealerships in Florida. Norman had been an active member of the Tabernacle Church in Sarasota, FL and of the Full Gospel Business Mens Association.

Funeral services will be held at Sarasota National Cemetery on Tuesday, July 27, 2021 at 9:30 am.

In lieu of flowers you may send memorial contributions to Tidewell Hospice, a Veterans organization, or the Tabernacle Church.

To send flowers to the family or plant a tree in memory of Norman Lee Baker, please visit our floral store.

You can still show your support by sending flowers directly to the family, or by planting a memorial tree in the memory of Norman Lee Baker
Share a memory
© 2021 Shannon Funeral Home. All Rights Reserved. Funeral Home website by CFS & TA | Terms of Use | Privacy Policy